In order to deal with the uncertainty of whether or not you have cancer, it is best to push for an early and proper diagnosis. The earlier cancer is diagnosed and treated, the better the chances of it being cured. Depending on the type of cancer a combination of tests could be used to confirm the presence of the disease and monitor its progress. Cancer diagnosis begins with a thorough physical exam and a complete medical history. There are mainly two parts to a cancer diagnosis -


First, a biopsy is a process wherein a part of the tissue is taken by the doctor and sent to verify malignancy. This process is called grading. Grading helps in understanding how aggressive the cancer is.

Second, imaging - in imaging, high-end techniques like Computerised Tomography (CT), Magnetic Resonance Imaging (MRI), sometimes Positron Emission Tomography Scan (PET Scan) are used to see how far cancer had spread in the body. This process is called staging. Staging helps in knowing whether cancer has left the original location and spread to other parts (a process called metastasis). Grading and Staging together the complete cancer diagnosis

Cancer staging is done based on the following principles - the location of cancer, the type of cell where the cancer is growing, the size of the tumour, whether cancer has spread to nearby lymph nodes, whether the spread is to other parts and how aggressive the cancer is. The TNM system is the most widely used system for cancer staging in most of the cancer hospitals. TNM where -

While the TNM system gives a detailed staging of cancer, its combination can be used to describe cancer in 5 stages with less details. You might find your doctors and nurses using one of these while talking about your cancer.

Stage 0 - abnormal cells are present (which may turn into cancer) but have not spread to nearby tissues.

Stage I, II, III - cancer is present. The higher the number the larger the tumor size and greater spread to nearby tissues.

Stage IV - distant metastasis present (cancer has spread from its primary location to other parts of the body.

Remember it is essential to DIAGNOSE CANCER accurately in order to treat it properly.

Early diagnosis is essential for successful treatment and cure. Various diagnostic tests could be used to confirm the presence of the disease and evaluate the most effective form of treatment. Diagnostic tests fall into two broad categories:

A needle biopsy is a procedure where a doctor uses a special needle to extract cells from the suspected diseased area of the body to check for the presence of cancer. 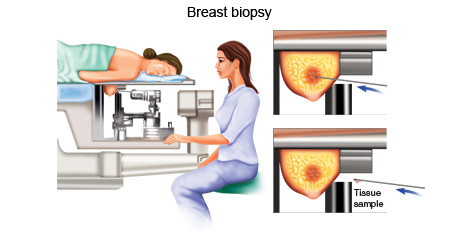 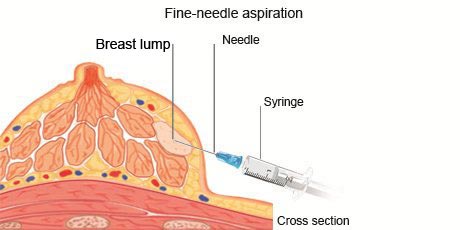 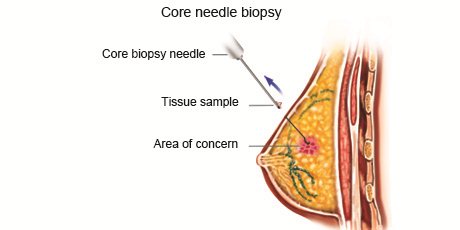 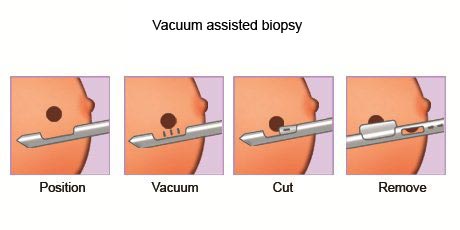 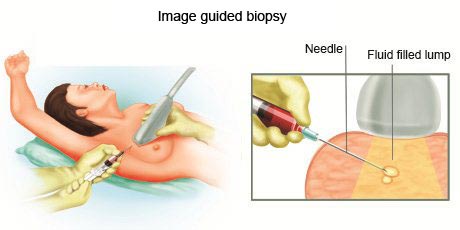 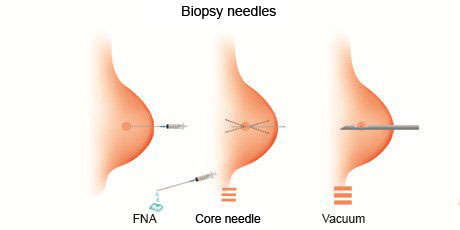 A needle biopsy is often used to extract samples from the diseased area of a patient. It is normally done when the doctor can feel the suspected tumour through the skin. When combined with an imaging procedure, such as X-ray, needle biopsy can be used to collect cells from suspicious areas that can't be felt through the skin.

During the procedure, the person receives a local anaesthetic to numb the area being biopsied in order to minimize the pain.

Endoscopic biopsy is a procedure where a doctor uses a thin, flexible tube with a light on the end to see structures inside the body. Special tools are passed through the tube to take a small sample of the tissue to be analysed. 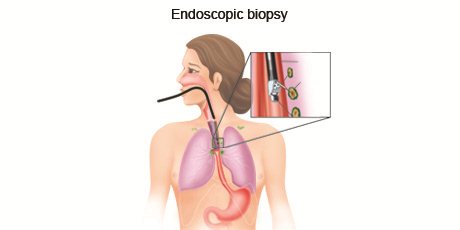 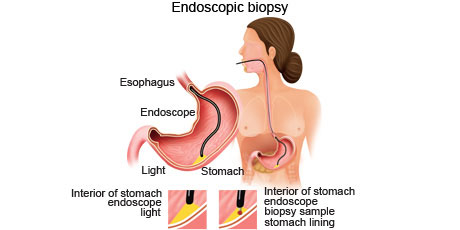 Depending on the type of endoscopic biopsy a person undergoes, a sedative or anaesthetic may be given before the procedure.

During a surgical biopsy, a surgeon makes an incision into the skin to access the suspicious area of cells in order to analyse them. 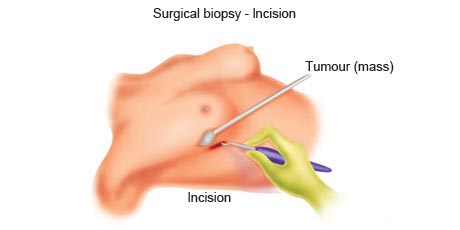 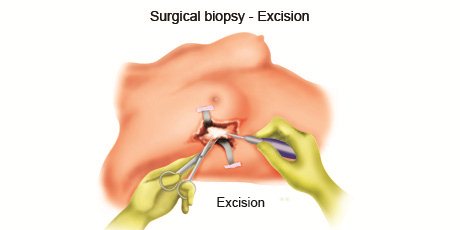 In an excisional biopsy, the surgeon removes the entire tumour - Often some of the normal tissue around the tumour also is removed

X-ray is an imaging procedure that uses invisible electromagnetic radiation to produce images of internal tissues, bones, and organs on film. X-rays may be taken of any part of the body to detect tumours. 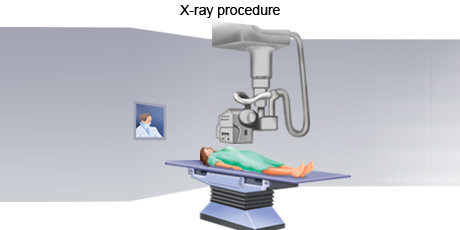 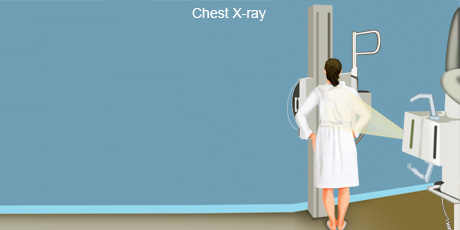 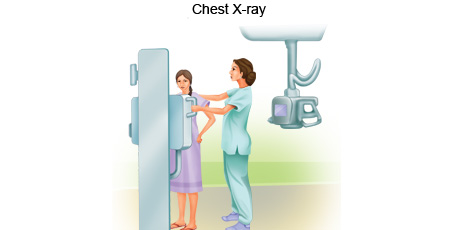 An x-ray is a safe, painless procedure that is often used to take images of the inside of the body. An x-ray is normally taken by an x-ray technologist. During the process an individual undresses to expose the part of the body that will be x-rayed, removing jewellery or other objects that may interfere with the image. The person may be given a gown or drape to wear. The part of the body being x-rayed will be exposed to the rays for a fraction of a second during which time the person must keep still so the image is not blurred. More than one X-ray may be taken from different angles to provide as much information as possible.

A CT scan is an imaging procedure that uses a combination of x-rays and computer technology to produce cross-sectional images (slices), both horizontally and vertically, of the body. The images could be of any part, including the bones, muscles, fat, and organs. CT scans are more detailed than general x-rays. Sometime a contrast material (such as a dye) may be given to make these pictures easier to read. 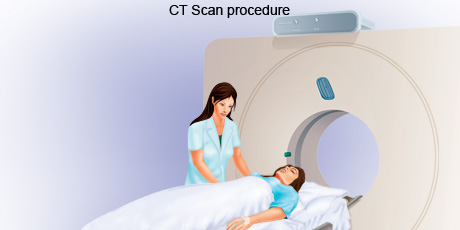 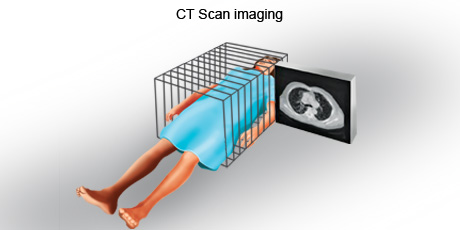 CT scans are also sometimes called CAT scans, which stands for computerised axial tomography. During a CT scan, a person lies down on their back on a flat bed. The CT scanner consists of an x-ray tube that rotates around the body. The person is usually moved continuously through this rotating beam. The rays are then analysed by a detector on the opposite side of the body.

The images produced by a CT scan are called tomograms and are more detailed than standard X-rays. A CT scan can produce images of structures inside the body including the internal organs, blood vessels, bones and tumours. The scan is painless and usually takes 10 to 30 minutes, depending on the part of your body being scanned.

An ultrasound is an imaging procedure that uses high-energy sound waves to bounce off tissues or organs inside the body to make echoes. The echo patterns are shown on an ultrasound machine, forming a picture of body tissues called a sonogram. 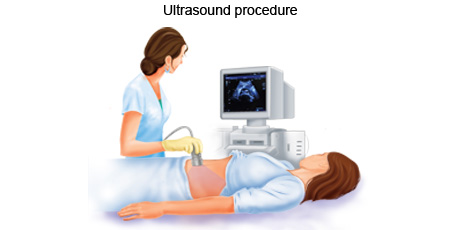 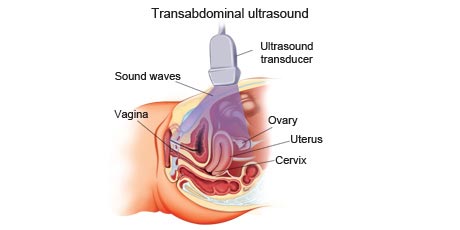 Ultrasound is the most commonly used type of imaging procedure. This technique uses high-frequency sound waves and a computer to create images, called sonograms, of blood vessels, tissues, and organs. Sonograms are used to view internal organs as they function. Tumours in the abdomen, liver, and kidneys can often be seen with an ultrasound.

Most ultrasound scans take between 15 to 30 minutes to perform. Before having an ultrasound scan, you may be asked to follow certain instructions before the procedure, such as:

MRI is an imaging procedure that uses magnetic and radio waves to create pictures of tissues, organs and other structures within the body, which can then be viewed on a computer. 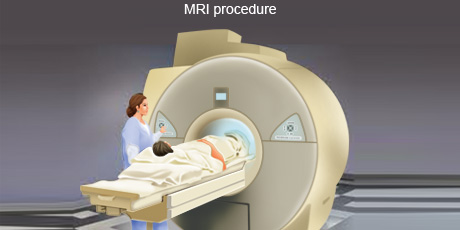 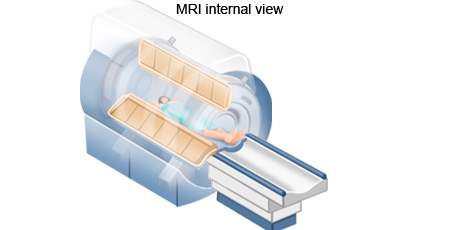 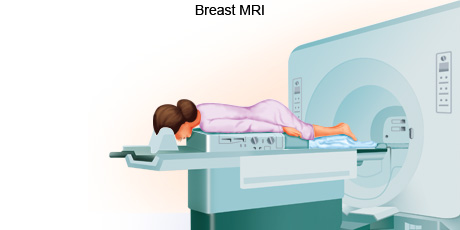 A MRI scan uses a combination of a large magnet, radio frequencies, and a computer to produce detailed images of organs and structures within the body. A MRI is often used to examine soft tissues like the heart, brain, liver, pancreas, and male and female reproductive organs. It is effective in assessing blood flow and to detect tumours to diagnose many forms of cancer.

Unlike some modes of medical imaging, during a MRI scan, there is no exposure to x-rays or any other damaging forms of radiation. Also, the pictures produced by a MRI scan, when compared to other imaging procedures, are much more detailed and therefore are of higher diagnostic quality.

During a MRI scan, the person lies on a flatbed which is moved into a scanning tube. Due to the strong magnetic fields that are produced by the scanner, it's important to remove any metal objects from the persons body. Depending on the part of the body being scanned, the person may be moved into the scanner either head first or feet first. The MRI scanner is controlled by a computer which is placed in a different room from the scanner so as to keep it away from the magnetic field generated by the scanner. A radiographer operates the computer and talks to the person being scanned through an intercom. The radiographer sees the person through a television monitor throughout the scan.

At certain times during the MRI scan, the scanner will make a loud clicking sound. This is the magnets being turned on and off. People undergoing a scan will be given earplugs or headphones to wear. It is very important to keep still during an MRI scan. The scan lasts for 15 and 90 minutes, depending on the size of the area being scanned and how many images are taken.

Radionuclide scan is an imaging technique that is used to diagnose, stage and monitor disease by producing pictures of structures inside the body, including areas where there might be cancer cells. 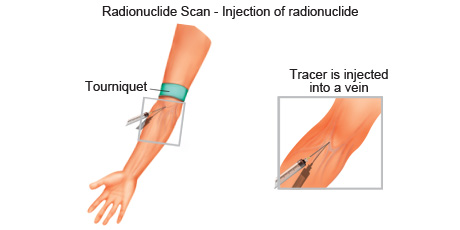 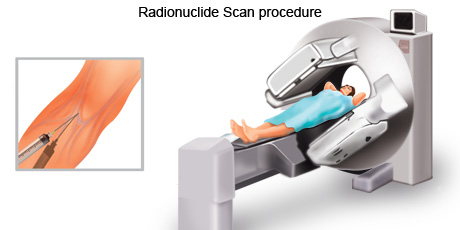 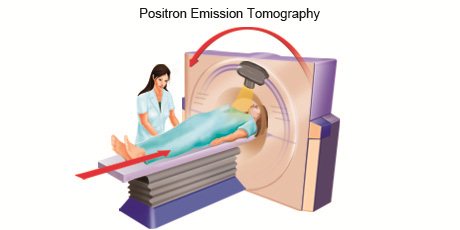 A radionuclide scan is a procedure where a small amount of a radioactive chemical (radionuclide) is injected into a vein or swallowed. Different radionuclides travel through the blood to different organs. A machine with a special camera then moves over the body to detect the type of radiation given off by the injected radionuclide. A computer then forms an image of the areas where the radionuclide builds up which also might be areas which contain cancer cells.

Two common radionuclide scans are the bone scan and the PET scan.

The bone scan uses a radioactive tracer to look at the inside of bones. The radioactive tracer, in this case, is injected into a patient’s vein. As the tracer collects in different areas of the bone, it is detected by a special camera. While healthy bone appears grey to the camera, injured areas like those caused by cancer appear dark.

For a PET scan, the radioactive tracer is passed into the person’s body either by injection, through an inhaler, or in the form of a small tablet or capsule that the person swallows. The tracer gives off particles called positrons that release a type of radiation known as gamma waves, which can be detected by the PET scanner. By tracking the movement of the tracer, the scanner can build up a detailed image of a number of the body’s functions as well as highlighting areas of the body that have been affected by diseases like cancer.

To prepare for a radionuclide scan, most people might be told to fast overnight before the procedure. During the scan the person lies on a flat bed which is moved through a large circular scanner. While the scan is in process it is vital that the patient keep as still as possible. The time taken for the scan depends on which part of the body is being scanned and which substance is being used.

Most patients go home as soon as the scan has been done. Doctors advise people to consume lots of liquids to flush the radioactive drugs out of their system more quickly. Experts say most radiotracers should have left the body completely within three to four hours after entering the body.

You will have several questions that you would like to ask your doctor during and after diagnosis. It is important that you ask these questions and feel that adequate answers are being provided to you. These answers might help you better deal with the management of the disease if it exists.


Remember you have the right to a second opinion about your diagnosis and treatment. Asking for a second opinion does not mean that you don't like or trust your doctor. Doctors understand you need to feel that all options for the best treatment are being explored and the best is being chosen for you.